I use a HP DL380p gen 8 for virtualization. The DL380p is a perfect server for that. These servers are cheap to get, and can hold a lot of memory, and reasonable powerful CPU’s. The DL380p gen 8 can use two CPU’s. When I bought this server I also got 4 2.5″ SAS disks of 600GB. And when playing around with virtualization, disk space can be a thing.

So I didn’t want to configure these disk in a RAID 5 set, since that would cost storage capacity. Another option would be to configure the disks as JBOD’s (Just Bunch Of Disk). Unfortunately the build-in RAID adapter of the DL380p gen 8 (Smart Array P420i) doesn’t support this. However more on this later on, since this turns out to be the key thing.

So I ended up in configuring the disks in two RAID 0, giving me 2 logical drives of roughly 1.2TB.

But I really don’t like RAID 0, since if one drive fails, you loose all the data. And sure I make backups. But reinstalling reconfigure a server is not something I like to do.

The DL380P I have can store a total of 8 drives. So I could place another 4 drives, and configure these in RAID 5 set. Another option I explored is to use ISCSI. I created ISCSI targets on the QNAP NAS servers, and configured a software RAID 5 on them. And while this works, I depend on my network. Which is not always ideal.

But there is a much cooler way of getting plenty of storage. And that is playing around with Disk Selves.

Getting a Disk Shelve 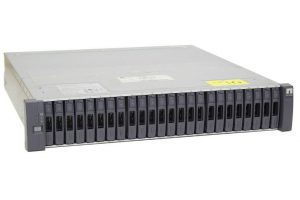 Currently it’s possible to get for example Netapp disk shelve like the DS2246 for cheap. These disk shelves are dumb. That is, to just present the disks. They don’t do fancy stuff like RAID, SMB, NFS or any other fancy stuff. The DS2246 can hold 24 2.5″ SAS,SATA or SSD disks.

A dive into external disk shelves and SAS

Since I’m a network guy, and not a storage dude, I had to dive into connecting a disk shelve to a server. And well, it didn’t sound that complicated. As it seems I only need to connect the DS2246 to a server. And  all you need for that is a SAS controller card with a external SAS port. The important bit is that a “special” cable is needed. Since the Netapp uses SSF 8436 port, and most SAS controllers with external port uses SFF-8088. These cables are called “QSFP SFF-8436 to Mini SAS SFF-8088”

Once I understood how the physical connection works, time to trying the next question: Raid or using HBA ? 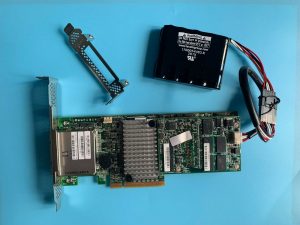 Basically there are two ways of presenting the disk of the disk shelf to the server. One method is to use a hardware raid controller. These controllers allows you to configure raid 0,1,5,6 for example. And some even allows you to configure raid 50,60. Which is just a mirrored raid 5 or raid 6 set. Once a raid set is configured, the server sees a logical drive. So for instance, if two 1TB drives are configured as a raid 0, the OS on the server sees a 2TB drive.

The other way is using a controller which supports HBA or also called “IT mode”. In this mode the controller works in a “pass through” mode. Meaning it presents the disks as is to the server. So it doesn’t provide any raid capability what so ever. The idea behind this is that all the individual disks are visible in the OS of the server. Which allows for using software raid to create raid sets.

There are RAID controller cards, which allows for running in RAID mode, or in HBA mode. This can be important. More on that later on. But upfront: Get a SAS controller with external ports which supports HBA and RAID. It can make your live much easier.

Once all the stuff arrived I installed the LSI card in my HP DL380p gen 8 server. Hooked up the DS2246 with the cable I got and turned both devices on. And when I powered on the DS2246 I was shocked how noisy this beast starts up. It is really loud. Luckily after a few seconds, all the fans decided to spin down, to a very acceptable noise level.

And once all started up, I entered the RAID BIOS, on LSI cards, this is called “WebBIOS” I could see all the drives, but they were all marked as “unsupported” oh boy.

In part two I’m trying to get this working. Hopefully I can get it to work, or else I got a lot of unusable disks, 24 to be precise…