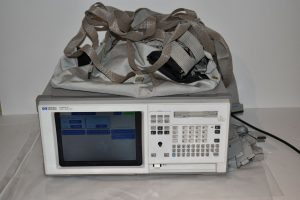 The bench top Logic Analyzers from HP namely the HP 1660E/ES/EP-Series have a builtin IDE hard drive. While this hard drive is not used during the boot process of the Logic Analyzer, the hard drive can be necessarily to  initialize some of the modules. Without the hard drive you may see errors like: not enough room to initialize modules. Since these drives are old, and can fail it might be smart to swap them out for a CF card. 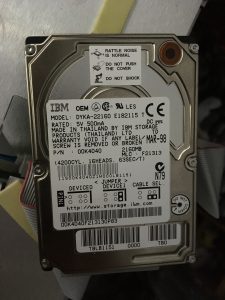 The plan is to replace this hard drive with a IDE CF Card adapter and a CF card of 2Gb.

This should be the easy part. The process should go along the lines of:

Well it turns out to be not that easy. At least if your using Mac OS that is. In the past I tried several USB devices which should be able to present a external hard drive as a usable device under Mac OS. However most of those external USB hard drive docking thingies are not working properly. Or the USB device itself is not recognized by my Imac, or the device is recognized, but doesn’t show any device in Mac OS.

“Why don’t you use windows for that task?” I can almost hear you ask. Well, I don’t have any hardware lying around to run a physical Windows system on. Well I have a very old laptop which runs Windows XP, but has only very slow USB ports, which brings a lot of it own limitations to the table.

I use a windows 10 virtual machine, but for that to work the USB device much be recognized by Mac OS for this to work.

So step 1 is to find some usb device which is able to read laptop IDE’s and CF card at least. This USB device must work under Mac OS. 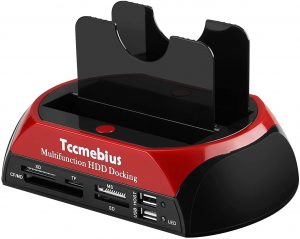 After a lot of searching I found the Tccmebius Harde Schijf Docking Station, TCC-S862-DE USB 2.0. Reading about this device it looks like it is supported by Mac OS. While not cheap, it’s not to expensive either. So for 28,00 euro found on Amazon it’s worth the gamble.

Other models have for instance USB 3.0 support. However I read that it gives problems. Some had to use a USB hub to get it working. Since I wanted a device which could read CF, SD, and IDE and SATA I picked up this model.

While this device works under Mac OS without problems, not all is good. The quality of the usb device feels very cheap plastic. Inserting a CF card is scary. It’s easy to bend the pins (already done that). The CF card goes in upside down. And it’s difficult to place.

Placing a 2.5″ disk is also tricky. The manual states to remove any metal backplate. And I know understand why. The disk sits flat against the backsite of the slot. this makes it impossible to see where the pins and the connector mate. Risking again bending the pins.

Once the hard drive and CF card are inserted without causing any damage, the disks shows up as devices under Mac OS.

To get a list of hard drive devices use:

That’s the good news. So the next step is to use the ‘dd’ command to create a image from the hard drive.

This is done by using for example the command:

The bs parameter (Block Size) is determined by selecting a size which gives the best performance. However I discovered that by setting the bs to a high value, the error:

popsup. I’ve tested this under Windows 10 in a VM, and also get errors with the device as I choose the number to high.

And yes, you can use the dd command under windows as well. I’ve installed git under windows, and that comes with some Unix tools, like the command ‘dd’.

So after leaving the bs parameter alone, I could create a disk image. Which is great. Placing the created hard drive image back unto the 2Gb CF card was easy to do with the dd command as well. I used a command like:

( I removed the IDE HD at this point, and the CF card reported itself as disk3.)

So while the Tccmebius TCC-S862 is not very user friendly, it kinda works. Maybe there a better solutions out there, I don’t know. But having a device which actually works under Mac OS is a big plus. However think twice if you really want to buy this device.

Installing the CF card into the HP 1660 Logic Analyzer 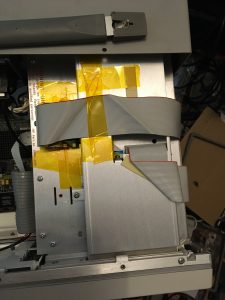 After the CF card was prepared by placing the disk image on it, installing the CF card adapter and CF card into the Logic Analyzer was easy. For now I used kapton tape to make sure the CF adapter cannot short out, and also for now taped the adapter to the chassis. This doesn’t look nice, but as this is a temporarily fix, till I know for sure it works reliable. And we all know how permanent a temporarily fix is.. right ?