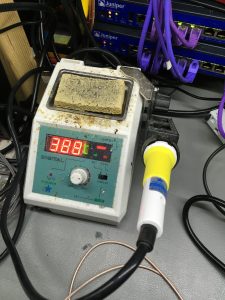 my daily use soldering station. As can be seen I used this station quite intensive.  It’s a HQ/Solder 30. It can deliver 48Watts, and it is relativity cheap. When I bought it a couple of years ago, it was around 70 euro’s. The only problem I encountered was that the soldering iron itself stops working after a couple of years. With a replacement of 30 euro’s I could continue to use this station. And it worked very well I soldered a lot with this station. However I become more and more across PCB’s with big heavy ground planes, and this station simply can’t deliver the power (and thus heat). So after a lot of thinking, postponing the decision I finally got around to upgrade this station.

Requirements for the new solder station

As being said, I ran more and more across big ground planes. So the next solder station must be able to handle this. So I made a small list with requirements. These requirements are partially based on the experience I gained with the HQ/30 solder station. The short list of requirements:

One of the requirements is to have active soldering tip. The reason is that the heating element is build into the tip itself, as the temperature sensor. This has the benefit of a good thermal couple, and thus a better transfer of heat. Also if the tip cools down due to a large ground plane (for example) it will recover faster.

However, there are some downsides to a active tips system:

The last point can be addressed by making sure the solder station has enough power. Also there are now clones on the market which are cheaper then the established brands. Which also provides cheaper active tips. However, take into account that the materials used in the tips are less durable then the more expensive tips. 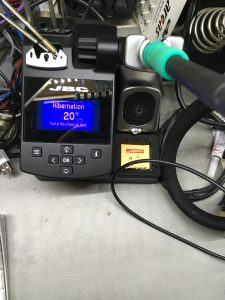 I looked around for a good replacement, taking the requirements into account. And finally came to the conclusion it’s better invest more money, then trying to save some money and go for a cheaper solution, by looking into clones. So I bite the bullet, and decided to go for a JBC station. These stations are not cheap, but in every test I have seen, the JBC just leaves all the others behind in terms of performance. Furthermore I looked for example at Hakko stations, but the don’t have a small footprint. Well they have a large order of different tips, the JBC even has more choice. Also the operation experience is better on the JBC.

This isn’t a review of both of the soldering stations, but the question might arise to compare the two stations. Well comparing the two stations isn’t really possible. I tried to solder some components on a big ground plane with the JBC, and it has no problems with it, while the HQ/30 isn’t able to melt the solder.  Also the time to heat up, the JBC reaches it’s working temperature in a few seconds. The HQ/30 takes it time. Comparing a 70 euro solder station to a soldering station which costs around 400 euro is not a fair comparison. And comparing a traditional solder tip to a active tip doesn’t make any sense either.

Being said that, the tips of the JBC comes at a price which is almost half of the price of the HQ/30 station. A standard jbc tip cost around 25 euro’s. Some tips are above the 30 euro’s.  And that’s something to consider. The HQ/30 at least for me, is a perfect soldering station, for general soldering jobs. The temperature may not be accurate, but for most of the things I solder, this is not a big deal.

Learning to solder with a cheap station as the HQ/30 is a good option, and personally a great learning experience. However now that the time has come to upgrade I decided to invest the money, and leave the cheap soldering stations behind. With this JBC I should have a solder station I can trust on, that it will perform and works when I need it. And the HQ/30 is going to be my second solder station.

What soldering station to buy when you start ?

When someone starts with electronics, the question which solder station to buy comes up. Often the suggestion is done to start with a cheap soldering iron / station. Obviously if you don’t know if your going to solder a lot, there is no point in looking at expensive soldering irons / stations. But if your starting out, and you got the money to spend, it might be smart to invest in a solder station like this one.  At the end, you get a soldering station which will last a long time, and the luxury of active solder tips. Which makes the heat transfer much more direct, and consistent. If you don’t have the budget, there are some clones, which seems to be very good also.