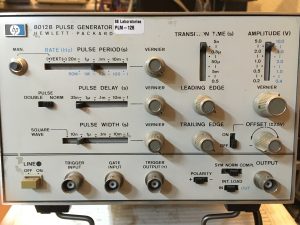 I’ve bought a HP 8012B Pulse generator. The main purpose is to have a small device which I can use for generating clock signals. However the device I received needs some work. The buttons are sticky, and very intermittent. And I also notice that the transformer got really hot while operating the device. However the device produces some signals, since the buttons are intermittent, it’s kind of hard to get some useful signals.

If you’re like me and like to mess around with old HP gear, you properly know that HP gear is well build, and engineered in such way that taking a device apart is often easy, so that access to the internals of the device for maintenance or repair is easy.  Well with the HP8012B this is not the case. Maybe because this device is from the mod / late 70’s. The access to the internals of the device is quite easy. Both the left and right panels have a few screws. Once these screws are taking out the panels can be removed.

To get the front panel off, it’s quite a different story. It’s a fiddly job, and just take the time for it. Make sure to take pictures, before taking the device apart. There are some cables which must be de-soldered. Because the boards needs to be taken out. Well actually the boards can be leaved in, but then it’s quite tricky to get to the screws.

Once the front panel is removed I give all the potentiometers and switches a treatment with Deoxit. And after operating the switches and potentiometers for a while they feel much more reliable. 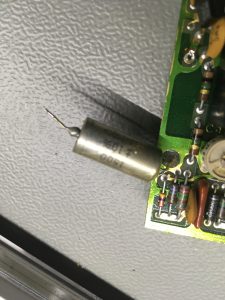 I suspect that the transformer is getting hot, due to some capacitors which gone bad. Before removing the electrolytic capacitors, make pictures. Because there are no markings for the plus or minus on the boards. I tested a few capacitors with my trusty HP 4261A LCR Meter, and found quite a few which are bad. So  I decided to replace every electrolytic capacitor. I also check a few resistors, but they where in spec, so no need to change them.

After replacing all the caps, 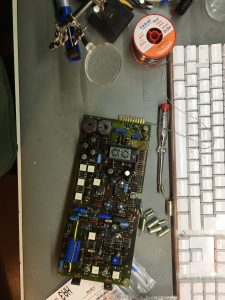 I started to reassemble the device again. This is also not as easy as it sounds. A few wires from the transformer needs to be soldered onto the board, and since the transformer is heavy and bolted onto the back plate this means I have to keep the back plate somewhat in place, and solder on the wires, without burning anything with my hot solder iron.

After a lot of swaeting I managed to get everything back, and then I realized I forgot to replace the power on light bulb.. Doh..

Replacing the power on light 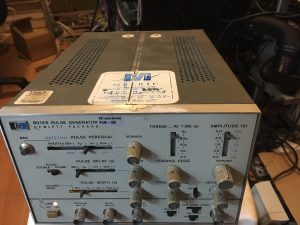 The power on light was burned out, so I needed to replaced this as well. Ideally you need to take the front panel off, or if the device is taken apart, replace the bulb at that time. Since I forgot to do that I have to take the whole thing apart again. Which I really don’t want to do. So I decided to try to place the new light bulb in place with the front cover attached. That’s not easy to do but I managed it.

The end result is one working HP8012B. This device is going to be used well in my lab. Very small device, ideal for generating clock signals. But it also allows me to test IC’s.