Almost every electronics lab equipment has the possibility to be controlled remotely. This is almost always done by using IEEE-488. Also known as ” HP-IB” As HP called it when HP developed this 8 bit parallel bus.   It’s also know as “GPIB”. (General Purpose Interface Bus).

In the old days a dedicated computer card was used as a controller, to perform remote operations on the lab equipment.

Nowadays we have LXI for example, making it possible to remotely control devices over Ethernet network by using the TCP/IP protocol. This doesn’t mean GPIB isn’t used anymore. Even modern equipment can have a IEEE-488 interfaces. For example my Rigol DM3608 has a IEEE-488 interfaces and can be configured to understand a specific command set.

Use an IEEE488(GPIB) communication -adapter

Nowadays it’s more common to use USB GPIB controllers to remotely control the (old) lab equipment.  There are a couple of choices:

However there are mainly two difference between the “brand names” and the Prologix:

For example the National Instruments (NI) USB controller present itself as a GPIB device. Whereas the Prologix presents itself as a serial device.

Which one to choose ?

If you look at the known brand names one, presenting them self as a gpib device, you notices these devices are not cheap. A new adapters can cost you as much as $1300,00 and no.. this is not a typo. While the Prologix adapter cost around $150,00 dollars.. So what’s the catch ? (there is always a catch).

And as always: It’s depends. Say for instance that you want to use an application from a vendor which only works with a GPIB device. The Prologix in this case won’t work. At least not out of the box.

On the other hand: If you’re about to write your own data log / measure applications, the Prologix might be a perfect solution, since  it’s a serial device, and you don’t have the overkill of using the NI-VISA drivers (for example)

Then there is of course the price. Luckily the GPIB USB adapters can be found relatively cheap second hand. I did found a genuine NI  GPIB USB-HS new in box for a around $150,00 dollar. Which brings these adapter in the price range of the Prologix one.

Comparing a Prologix and a NI GPIB USB-HS adapter

Since I have both types, let’s compare them in practice. To compare the adapters i’m going to use them in the following scenarios: 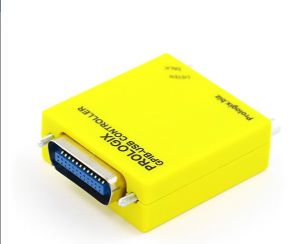 The Prologix USB adapter can be programmed by sending commands through a serial terminal. The GPIB address of the device can be set by sending:

So for example to set the GPIB address to ‘8’:

There several commands, which allows to configure the adapter to one needs. Also it’s possible to update the firmware.  To talk to the adapter FTDI device drivers are needed, which are available for Windows, Linux and MacOS. 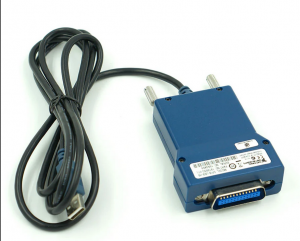 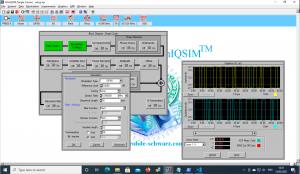 he application WinIQSIM works perfectly with the NI USB-GPIB-HS. The application has the benefit of using a GPIB device, or serial. However I could not get a serial device to work with my Rohde Schwarz AMIQ. I either received a timeout, or a communication error. At the end I tried to use a null modem cable, but this gives me problems also.

The main problem when using the Prologx in the case is the speed setting. The applications “sweeps” the baud-rate setting. The Prologix however, doesn’t care about serial baud setting. So the WinIQSIM application gets confused, when trying to determine the baud settings. I tried several options, even disabling the “sweep”, however the application kept trying to find the highest speed it could communicate on.

It might be possible to implement a driver in NI-VISA, I didn’t test this however.

In this case: The NI USB adapter wins.

Writing my own application

In this test I’m going to test the python script which I wrote to remotely control my HP 8175A. In this case I’m going to use Python since this makes testing under MacOS and Windows 10 very easy.

I’m going to use two modules:

Update: I finally got the NI-VISA driver working under MacOS. I just reinstalled the drivers, and when I give the path to the library (I tried that before, which didn’t work) it works:

When I use the NI-VISA tools, the adapter is recognized without problems. 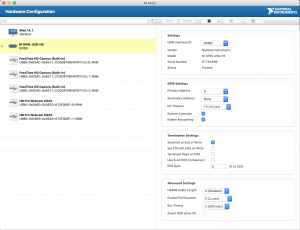 So I moved to windows, installed NI-VISA library, and PyVisa and it worked instantly. No problems what so ever.

Next I tried pySerial on both platforms, and both worked just fine. Of course I needed to adapt the device name (under MacOS this is:

Under Windows this is:

When using software which requires a GPIB device, then the easiest option is to chose for a USB controller which present itself as such a device. With some patience these devices can be bought relativity cheap. It might be possible to develop a own NI-VISA (or alike) driver for a Prologix USB adapter. Since I’m no expert in this, I didn’t do any research.

When using a NI USB GPIB controller (or alike) this will work under Windows. Under other Operating systems this might be problematic. With a lot of searching, and trying it might result in a working solution.  I couldn’t get the pyvisa to work under macOS the first time, after lot of trying and finally a reinstall, I could get it to work.

In my case the Prologix as the NI GPIB HS works on both platforms.

So the big question is: which wins ? Well if I only had Windows running as my Operating System, I definitely would go for the NI USB GPIB HS adapter, despite of the overkill of the whole NI-VISA environment.

Another thing to consider when using an adapter which relies on drivers like NI-VISA is when transferring software to other systems. For example when you write this awesome script in python for a specific device. When uploading this script to GitHub for others to use it, they need to install the (external) library. Which may be undesirable. In my case this is not really a concern.

However since I got both adapters.. I have the best of both worlds 🙂