The HP 8175A Digital Signal Generator 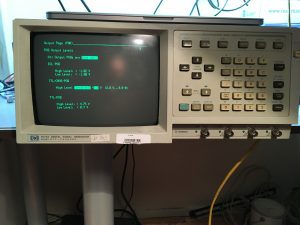 In the next couple of articles I’m going to take a look at this specialized piece of equipment: the HP 8175A digital signal generator.

The HP 8175A is a real best, it’s big, and weights a lot (about 17 KG). But it is a very nice piece of equipment to have in a Electronics LAB, especially when doing digital stuff.

The HP 8175A has 24 channels which can generate digital signals. And with option 002 installed arbitrary waveforms can be generated.

So I was surprised to find a listing for a HP8175 on Ebay located in Poland, where I could pick it up cheap. These devices are a special kit, and often sold as “untested” and therefore it’s possible to get a good deal on those devices.

Disaster strikes (or when things go boom in the LAB)

Once it arrived I did some checks before plugging in the power, and switching the device on: First I give the device a good shake. Not easy to with a big devices as this, weighting a 17Kg, but I managed it , and no rattling sound. Which is a good sign. Next I checked the voltage-line settings, and as I expected this was set to  240Volts.

Also very good. So at that point I plugged in the power, pressed the on button. And without any problems, the beast came  alive. 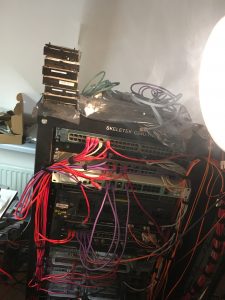 ang. And the next thing I noticed was that a lot of smoke was filling my lab.

I switched off the HP8175A and unplugged the mains cord form the device.

The smell, was just horrible. It took day’s before the smell was gone, anyway I  opened the device which was kind of a puzzle since I don’t have the service manual for it.

So I used the tactics: See a screw: remove that screw. Not alway’s the best practise, certainly not in this case, this device got a lot of screws. And I mean a lot. But finally I got inside and again I was impressed by the build quality as 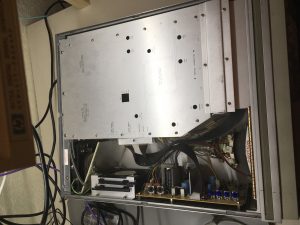 I aspect from these old HP devices. The power supply is completely shielded. Every board is connected to the main motherboard, and once a metal plate on the back is unscrewed, giving access to the POD connectors, each board can be slide out of the chassis. 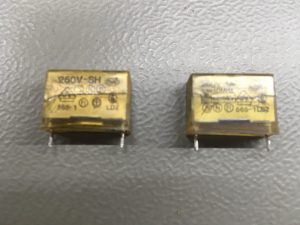 I could not see any damage. And a aspected, a filter cap has blown. These caps are famous for letting the magic smoke escape: RIFA cap’s. These caps over time get little cracks in their plastic housing, allowing moisture to get into the capacitor, which eventually will let out the magic smoke, with a bang.If these caps go..

They go violently. As I noticed. Since these are just filter capacitors, the device can run perfectly without them. Of course these filter caps must be replaced, but it’s not a problem to remove the cap’s from the Power Supply. And after de-soldering the cap and putting back the HP into one piece, I finally got to play with the device.

In part 2 of I’m going to look at what this beast can do.

One thought on “Adventures with a HP 8175A Digital Signal Generator”