The specifications of the HP 8175A

In the first part of the article about the HP8175A I talked briefly about what this device does. In this part 2 I’m taking a look at what the HP8175A is capable of doing. Before jumping right in, a short look back at part 1. In part 1 the HP 8175A released a lot of smoke, and the fix was easy.

However I realized that fixing these complex devices is almost impossible without spare parts. So I bought a second unit. As it turns out, the seller from which I bought the first HP8175A, had a second HP8175A to sell.

Since I let the seller know the magic smoke escaped , I could pickup the second unit really cheap. By arrival the device powers up, but nothing appeared on the screen. After reseating the boards, the device seems to work. I didn’t test all the outputs, but at least it starts up without problems. Of course I took out the RIFA cap, before it could explode 🙂

So now on to the specifications of the HP 8175A:

The HP8175A can be used in “parallel or serial” mode. In parallel mode the speed is 50Mhz. In serial mode, the channels runs at a speed of 100Mhz.

The “Operating and programming” describes the HP8175A as:

The 8175A is a digital generator which can deliver parallel and serial data with programmable patterns pattern durations. It can interact with a device under test and so provide simulation of a wide range of data paths in digital systems.

The patterns durations which can be programmed: 20ns to 9.99 seconds range / 10ns resolution. individually programmable.

Interface with the Device Under Test (DUT) 8 bit trigger / 8 flags.

Two HP8175a  device can be connected together in a master/slave operation.

Most of the logic families are supported: TTL/CMOS variable, ECL fixed.

The options available are:

So this is quite a list. When designing digital circuits this devices is very useful. Since I have a couple of Logic Analysers in my lab, the HP8175A is nice instrument to have.

The HP device in action 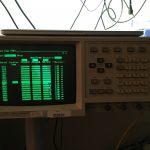 Here you see how to setup a pattern. Each bit can be set for a channel. And it’s also possible to set the duration. 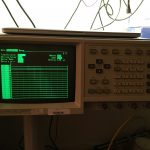 It’s also possible to use a more graphical view to enter the digital waveform. 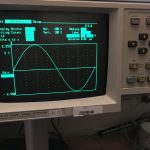 Since one of my HP8175A has option 002 installed, arbitrary waveforms can be created. This can be done in a kind of a program language, where mathematical functions are easily selected, and for loops can be used. In this case the “sin” function is used to create a sinus waveform. 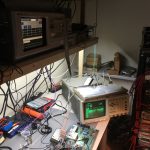 Here the HP8175A in action to find a fault on a C64 PCB board. The HP8175A is used to inject digital signals onto the databus and address bus, and a HP 1670G Logic Analyser is used to read the bits.

In the upcoming part 3 I’m going to repair some of the issues the devices have, and refurbish the devices. And I also let you know how to get the service manual for the HP8175A. The service manual is hard or impossible to find online, and if you want to buy the Service manual the prices are going through the roof. I’ve seen hardcopies sold for $100…