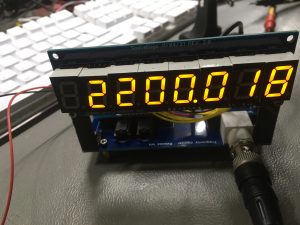 Since the Corona virus pandemic I got some more free time on my hands in the weekend and decided to blew off the dust from a project I was working on. This project involves designing and making a frequency counter. This project is more about learning on how to make a modular design.

The frequency counter has the following modules:

The things I wanted to improve

Secondly I wanted to reroute the PCB’s. Since the start of the project I used auto router to route the traces. Since it was one of the first PCB I created. Since I learned a lot more about PCB design I decided to route all the trace manually.

And I wanted to learn more about SMD soldering so I decided to change some IC’s from a DIP package to a smd package. Which means I had to swap connections to other pins, since the pin numbers are not always the same.

And last I wanted to have the ability to mount the display on to the main-board.

Testing the changes made

Once the new PCB’s were in, I started to solder all the IC and other parts. Once completed I realized that I didn’t think about adding a ISP header on the uC board.

So I had to improvise:

First soldering the wires to the micro controller 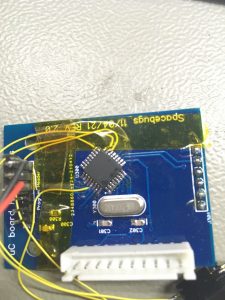 And finally after connecting all the wires together I could hook up a Arduino UNO as a ISP programmer. And could flash the boot loader. After that I could use the program header to upload the firmware. 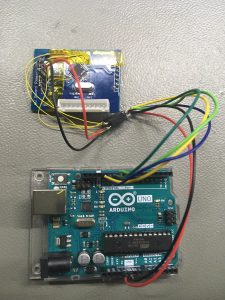 And this is how the end result looks like. I didn’t have cleaned the board, since I’m still testing, but to my surprise the counter was working the very first time. And the result looks like: 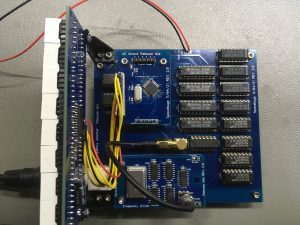