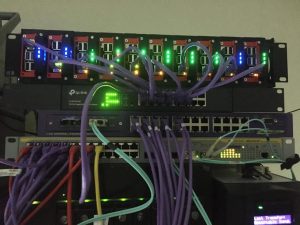 For quite some time I want to play around with a PI Cluster. Of course “cluster” can mean many things. A Cluster can be combining all the CPU power of the nodes, to get more processing power. A cluster can also mean having couple of nodes to build a scalable platform like OpenStack. In this case, the purpose of the cluster isn’t that important. The thing I’m mainly interested in is build a frame which can hold a couple of PI’s. And the frame should be easy to extend, so that when there is a need for more PI nodes in the cluster, the frame is can be easily extended. At the end I came up with a working frame. However this implementation might not be suitable for everyone… More on that later on.

How this all started

With a friend of my we started to build a 20 node PI cluster. The cluster was split into two: 10 Nodes lived in my home, and the other 10 nodes lived by my friends house. We used a VPN to connect the cluster nodes together. This worked great. However when we used PI3 nodes, we needed cooling. And the current frame didn’t provide that. After a attempt to alter the frame to add cooling FAN’s I realized that it might be better to start from scratch. The reason for that was during the cluster was operational, we discovered the current frame could be improved by adding some features.

Well the “ultimate” is maybe a bit strong.. but since I wanted to redesign a cluster from scratch I decided that at least the following features must be implemented:

Powering each node from a power supply is the hardest part to implement. After thinking about it I came to the conclusion that I could do this by developing a back-plane. This back-plane is then used to distribute the power from one Power Supply (PSU) to all the other nodes. This sound like a great idea. However it introduces a new problem:

By using a back-plane design it’s easy to come up with a PCB for each node , which would provide the interconnect between the PI node and the back-plane. Which makes it possible to remove or insert a PI node.

Next thing problem to tackle was: How to keep the PI node cool, so that the CPU won’t overheat and throttle. I soon came with the idea to develop a PI Cluster HAT. This Cluster HAT solves a couple of other problems:

Within three months I had the first version of a 10 node cluster working. It would take me another six months to get it to a a workable version. The final design uses 3 PCB’s:

The downside of this is: To build this cluster frame, a lot of parts are needed, and the PCB’s must be soldered. So that’s why this might not be for everyone. However…

OpenSource is the way to go

Did I mention this whole design is OpenSource? No?? Well it is. And it’s on github for everyone to download. All the 3D models, Gerber files , schematics, a full hardware assembly guide is available. You can find it here